Sophomore Ariana Mangano of Colts Neck is taking her love for and skill in fencing all the way to the World Championships this spring! With epee as her weapon of choice, the 15-year-old continues to earn district, state, and national titles in individual events across the country – the most recent being her placement on the U.S. World Cadet and U.S. Junior World Fencing Teams. She will compete with fencers from across the globe at the April 2017 tournament in Bulgaria.

Ariana traveled to Kansas City, Missouri, over Presidents’ Day Weekend to compete in USA Fencing’s Junior Olympic event to determine whether she would qualify for the World Teams – and after four days of battling on the strip, she did!

“I have worked and trained very hard this season, and I am honored to have the opportunity to fence for the United States at the World Championships on both the Cadet and Junior World teams,” said Ariana. “My goal for this season was to try and make the Cadet team—making the Junior team was completely unexpected.  I am really privileged to be able to fence with my teammates on both teams. They are a very talented group of fencers, and I really like them all. We will be fencing together shortly at the Pan American Zonal Championship in Cuba, and I am hoping it goes well.  I know that I would never have been able to do all of this if I did not have the support and love from my parents, my coaches, and all my teachers. I feel like we are the Mangano team!” 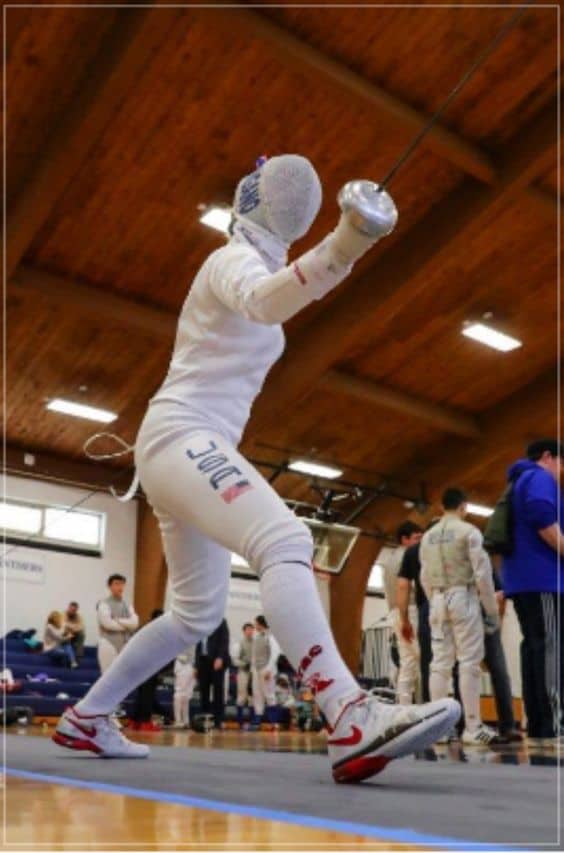 Just a few weeks ago, Ariana won the championship title in epee at the New Jersey State Prep State Fencing Tournament, held on Ranney School’s campus in Tinton Falls on February 13, among 15-plus teams. Mangano earned the same title at the 2016 State Prep Tournament. She is currently ranked #2 in the Nation for Cadets, #4 in Juniors, and #7 in Seniors after winning three golds (Cadet Women’s Epee, Junior Women’s Epee, Cadet Team Women’s Epee) at the November North American Cup (NAC) and silver in the Division I NAC event in December 2016.

But Ariana’s story is even more amazing than the number of titles she has won at such a young age. After a sports injury to her shoulder in 2015, she was determined to learn how to fence with her left hand, but thanks to multiple doctor visits and a proper rest period, she was able to get back on the mat. In fact, within a few months of the injury, she won the Youth 14 Women’s Epee at the Kansas City NAC, and then made her way to the top 22 in the Division 1 NAC to qualify for the Division Championships. She finished in the top 8 at the St. Louis NAC in the Junior Women’s Epee division that year.

Ariana trains 20 hours a week at the New York Athletic Club (NYAC) and Atlantic Fencing Academy (Tinton Falls) with her coach, Olympian James Carpenter, and her strip coach, Donna Stone, a three-time U.S. National Epee Champion and three-time World Cup Finalist. She also works with Ranney’s Fencing Coach Mohammed Shafaie. “I always have to tell her not to win so fast—I want her to take her time,” says Coach Shafaie. “Ariana is the best and I am so proud of her.”

The scholar-athlete remains committed to her academic work as well, and says her mother, Joy Vastola Mangano—who graduated from Ranney in 1978, Ranney’s teachers have made all the difference in that regard.

“There is no way that Ariana would be able to fence at this level without the support of each and every one of her Ranney teachers. They make sure she knows the material she misses and they all give her the confidence and support she needs to fence with a clear head and not worry about the stress of school.  They work around her schedule, and this type of support is priceless.”

The ability for students to pursue their passions in-depth is a benefit valued by many independent school parents like Joy. As an independent school, Ranney has the flexibility to work with students who require periods away from the school day in order to compete at high levels of sport—or other fields—outside of school. For example, the school has worked with equestrians in the past that needed to train in Florida during the winter months.

Explains Chemistry Teacher Gerald Gance, “Prior to leaving on one of her competitions, Ariana and I sit down and plan what she needs to do. When she returns, she has everything completed or within a few days thereafter. She is a wonderful, mature young lady with a warm personality and strong work ethic. She is a role model for her peers and greatly enhances the friendly and academic atmosphere of the class.”

Ariana is also a member of Ranney’s Upper School Chorus and the Tri-M Music Honor Society.